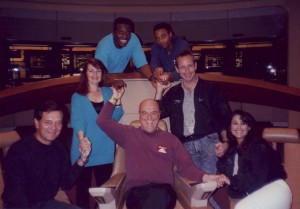 Actor and musician who replaced Jeffrey Deacon as stand-in for Patrick Stewart with the beginning of Star Trek: The Next Generation’s fourth season. He remained on the show for the last four seasons and served also as Stewart’s stand-in on the feature films Star Trek Generations, Star Trek: First Contact, and Star Trek: Insurrection. In addition to this, he appeared twice as a background actor on screen, although he received no credit for this work. Tracy also worked as an additional stand-in for actor David Sage in Ten Forward scenes for the fifth season episode “Violations” in 1991, and was the stand-in for guest actor George Ede on the episode “Cost of Living” in 1992, for Richard Herd in the sixth season episodes “Birthright, Part I” and “Birthright, Part II”, and for Norman Snow in “Rightful Heir” in 1993.

Tracy was born in Mattoon, Illinois and has been married twice. His second wife Roma Lee Tracy was a background actress in an episode of The Next Generation and in Star Trek VI: The Undiscovered Country. Tracy studied drama at the College of Theatre Arts at the Pasadena Playhouse in the early ’60s and continues honing his stagecraft whenever possible, beside performing rock and roll with several bands in the Los Angeles and Las Vegas area.

In 1980 he turned his focus to television and film and had his first speaking role in the comedy Under the Rainbow in 1981, which also featured Star Trek performers Jim Boeke, Beth Nufer, and Felix Silla. For this role he had to shave his head, a precursor of things to come. His early work includes roles in the horror sequel Halloween II (1981, with stuntwoman Donna Garrett) and an episode of ABC’s Afterschool Specials (1983, with Robert DoQui). Dennis Tracy and Randy Pflug on location for the episode “Final Mission” Between roles he served as casting director at several offices, beginning with Nancy Mott Casting where his favorite assignments were the thriller Dreamscape (1984, with Christopher Plummer and Larry Cedar) and the sci-fi caper The Adventures of Buckaroo Banzai Across the 8th Dimension (1984, starring Peter Weller and Christopher Lloyd, and with Robert Ito, Vincent Schiavelli, and Jessie Lawrence Ferguson). They might also be his favorites because he was the stand-in for Eddie Albert on the former and Clancy Brown on the latter. He and Mott then assisted Pearl Kempton’s office in casting the drama Mass Appeal (1984, with Jerry Hardin and John Vargas). Then it was on to the Atmosphere Agency and John Huston’s Academy Award winning Prizzi’s Honor (1985, with Lawrence Tierney). Tracy and Mott were also involved in the casting of videos for early MTV performers, including Glenn Frey, Sammy Hagar, Whitesnake, and Vixen. His on-camera video work includes Pat Benatar’s “Shadows of the Night” (1984), Helix’s “Gimme Gimme Good Lovin'”, Don Henley’s “In The Garden of Allah” (1995), and Live’s “Lakini’s Juice”.
In July 1990 he auditioned for the stand-in job for Patrick Stewart on The Next Generation and was one of four finalists. He claims he got the job in part because of the similarity between the two, even though that’s not always a requirement. His first task was lying down all day on a Borg biobed for the episode “The Best of Both Worlds, Part II”, testing the lights for Picard’s “tear” scene. In an interview for the Star Trek: The Magazine November 1999 issue (Volume 1, Issue 7), he jokes that it was probably the easiest first day of work most people will ever have – literally lying down all day. He remained on the production and its feature films, including many location shootings and making friends like Lena Banks, Tracee Lee Cocco, [1] and Pam Blackwell, until 1998. [2] During this time he was a regular guest at several Star Trek related conventions and fan meetings.

Beside his regular work on Star Trek, Tracy has performed in a number of feature films and television series. He appeared in the television film By Dawn’s Early Light (1990, with Glenn Morshower), played Harold Dolan in The Larry Sanders Show episode Hank’s Wedding (1993, alongside Wallace Langham and Penny Johnson), acted as a fan in the sports drama Blue Chips (1994, with Alfre Woodard), was an arresting cop in Bryan Singer’s The Usual Suspects (1995), a bald guy in Oliver Stone’s Academy Award nominated thriller Nixon (1995, with Robert Beltran), alongside Phil Hartman in the comedy Sgt. Bilko (1996), was an extra in The Drew Carey Show episode “Drew and the Conspiracy” (1998, with Diedrich Bader and Jim O’Heir), played a Stork Club Patron in the biopic Winchell (1998, with Christopher Plummer), and portrayed a balloon folder in the The Parent Hood episode “Deserving Honors” (1999).

He also served as Stewart’s stand-in on the 1998 thriller Safe House, where he again worked alongside Stewart’s regular stunt double John Nowak. More recently he played a cop in Eve and Gwen Stefani’s music video “Let me Blow ya Mind” (2002) and Deputy Ben in the horror film Cthulhu (2007).

In 2009 Tracy appeared as Wellford Hunt in the episode “Wounded” of the fan-based Star Trek series Star Trek: Phoenix. 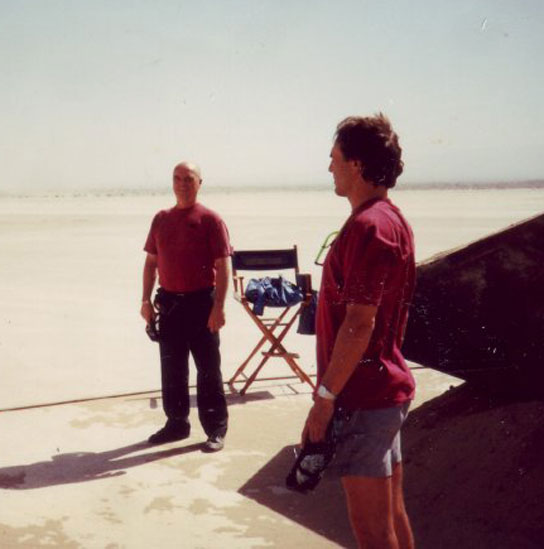